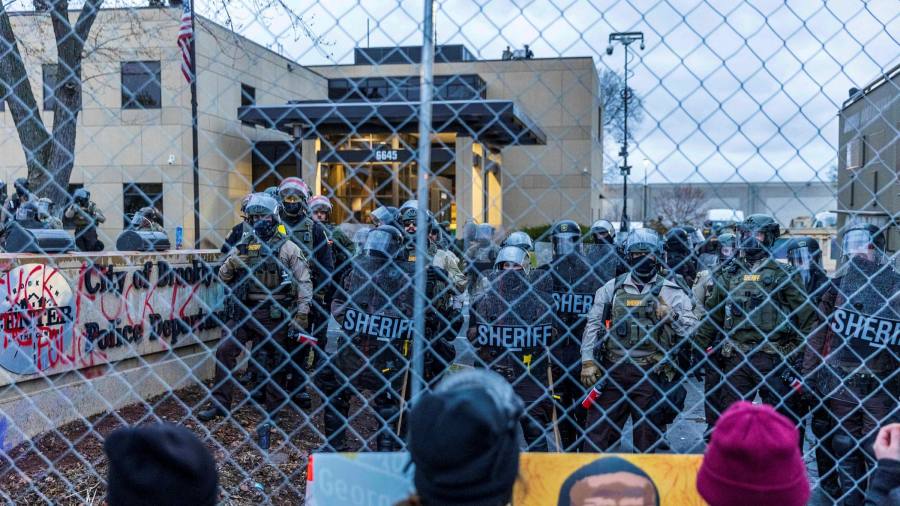 ‘Not yet’: residents stunned by police murder of Daunte Wright

Humboldt Avenue in the light of day is nothing like the chaotic battlefield it transforms into after dark.

Cars and trucks speed down the wide suburban highway in Brooklyn Center, Minnesota. There are apartments, a church and a high school. And a police station.

The police station, now separated from the avenue by chain link fences, has been the subject of protests for five nights and count, after an officer killed a black man last Sunday – just 13 miles au north of where another former officer is on trial for killing a black man.

The death of 20-year-old Daunte Wright comes as Minneapolis is already preparing for a verdict in Derek Chauvin’s trial for murdering George Floyd last May. Floyd’s death sparked protests for racial justice around the world.

“When I see it and heard it, I said, ‘Not yet,’” Annette Combs, who works near Humboldt, said of her reaction when she learned of Wright’s death.

After dark, the avenue is lit by spotlights. National Guard jeeps and armored vehicles block access from the south. There is a cacophony of flash bangs, tear gas and rubber bullets from law enforcement and fireworks from protesters. Police arrested dozens of people for violating a city-imposed curfew.

Pastor Simeon Momanyi was in the middle of it, his house sandwiched between his church, the Kenyan Seventh-day Adventist community, and the police station. The last few days have been difficult for him and his flock.

“When George Floyd was killed it was traumatic for a lot of people,” he said. “It’s been a year and people have almost started to recover from it. There were a lot of demonstrations. [You think] the police, when they interact with black people, people of color, they will be careful. And then suddenly, again. Same city, same place. Something has happened again. “

The Brooklyn Center, just north of Minneapolis, is a middle-class, racially diverse suburb of 31,000 people with a large immigrant population. African grocery stores and restaurants dot the commercial strips. The median household income is $ 60,000 and many residents work in the manufacturing sector.

At 63rd Avenue and Kathrene Drive, one block from where Wright was shot, the modest one-story houses are lined with siding. Mourners have built a sanctuary for him there: a huge fist to the sky that echoes that of George Floyd Square in Minneapolis. It is surrounded by banks of roses, lilies, daffodils and Gerbera daisies. Electric tea lights spell out “DAUNTE”.

“This is crazy, man,” one man said Thursday afternoon. “Just a young king growing up.”

Brooklyn Center High School students Max Madyun and Daniel Retic are only a few years younger than Wright. They demonstrated Thursday with their peers on the school sports fields in front of the police station. As young black men, they both learned to change their behavior from the police, moving slowly and answering any questions.

“It sucks, but we want to live our lives,” Retic said.

“It’s like nature: I see a policeman, I have to do it,” Madyun added. “But then you see things like this that make you think, ‘I shouldn’t have to do this. This is not normal. ”

In recent days, “normal” on Humboldt has gone to bed with the sun. Five yellow ServiceMaster vans for cleaning up fires and water damage were parked outside a Dollar Tree that was set on fire Monday night.

Alhagie Njie runs her family’s grocery store, Value Foods African Market, a few doors down in the same mall. He feared the fire would spread through their building.

Hakeem Miller lives in an apartment next to the mall and across from the police station. He said he pushed furniture against the windows to protect his four children.

“It was chaos,” he said. “My children, they are asking if we are going to die.”

Tuesday night the temperature was below freezing and the police had batons. The Minnesota State Patrol had started sweeping Humboldt north, saying over a loudspeaker that protesters were violating curfew and had to disperse or face arrest.

Breanna Eaglefather has lost close friends to police violence. But the reason she went out to protest as soon as she heard the news, then went out the next night, and the next, was her 10-year-old biracial son. She wants to protect him.

“I have a personal responsibility,” she says.