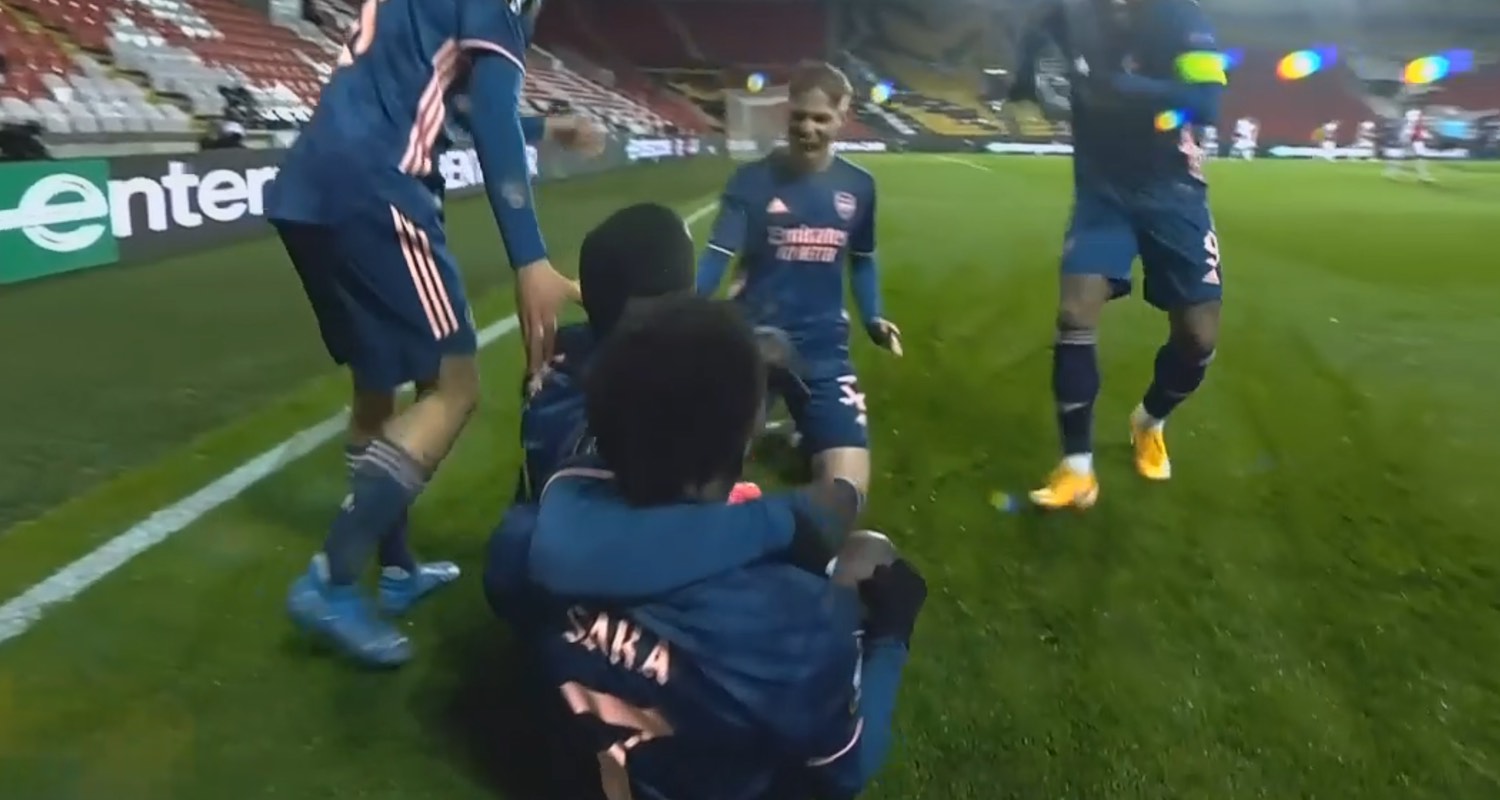 Slavia Prague 0-4 Arsenal: all hail the boys of Hale End

I guess it’s no big surprise that Slavia Prague started last night’s game quite brilliantly. Having not lost at home for so long it generates a kind of confidence and I found them to be quite sharp.

We weren’t bad, a little careless on the ball a few times which gave them more possession, but it was like someone flipped a switch.

We had a goal ruled out for offside, with Smith Rowe canceling the rebound after Saka’s initial shot hit the post. The wait for the VAR was endless, especially without reruns and just a very bright header shot from the referee to pass the time. It turns out that a seventeenth of half of three-quarters of one of ESR’s toes was offside. Thanks to technology for sucking the life out of the game to give us the right decision.

It was Smith Rowe who had fed Saka for that first chance, and our response to that disappointment was simply stellar. How do you deal with this kind of frustration? Well, if you just had a goal disallowed, why not keep the ball in their area surrounded by opposition, beef up one guy, then beef up another guy with a pass to Nicolas Pepe who showed a Fantastic composure to get the ball in from the near post. 1-0. VAR that, you cats.

A few minutes later, a good combined play to the right sent Smith Rowe into space, he put it out, Saka was fouled and the referee pointed to the spot. Alexandre Lacazette intervened, inserted it in the lower right corner and it was 2-0. His penalty this season has been excellent.

As for the third goal, Smith Rowe’s share might have been small, but it was vital. Watch how alert he was as the ball headed for the midfield. He was on his toes, pointed, and arrived before the opponent. Partey nearly sold Calum Chambers short with the pass, but the right-back kept it and played a smart pass with his left foot to Saka. From there, the 19-year-old made him look so, so easy – the mark of a really great player in my opinion. He took it, cut inside, and such was the precision of his shot, the goalkeeper didn’t even move. 3-0.

Wow. Wham, bam, and thank you ma’am. Some of the football we played in that first half was just scintillating. And remember, we did it with Granit Xhaka at left-back, we did it without the injured Martin Odegaard, and we did it without Pierre-Emerick Aubameyang who announced before the game that he had contracted malaria during Interlull, which is why he’s looked so below average lately (get him well soon)

The second half was less explosive, but I saw a team make a quadruple substitution in a competitive game for the first time in my life. I know there have been other examples but it was only the first time I saw it (well, a lifelong dream come true – now we just need Arsenal to score the 8th goal ).

Elneny came on for Smith Rowe, and late on Pepe provided an assist for Lacazette which led to the fourth base. The forward showed nice quick feet in the area and slammed his left foot. At 4-0, we saw Martinelli, Cédric and Eddie introduced, and there was a late appearance for Folarin Balogun. Slavia were however well beaten, beaten as they should have been in the first leg given the chances we had, and our reward is a semi-final with Villarreal, led by a certain Unai Emery.

I have to say I didn’t really expect it to be this comfortable, but let me tell you something, I really liked it. If we could do this a little more, I think all of our lives would be better. Something to take into account there, folks. Obviously, the focus is on Smith Rowe and Saka, with Mikel Arteta going on to say:

“For me it’s a joy to see them play and watch them every day in training. How they behave, the passion and commitment they have for the club and how much they love to play football.

“You have to let them express themselves and give them some leeway and ideas on how they can exploit their qualities. Then it’s up to them. I thought they were both really good today.

But they were ably helped by those around them. I know two games against relatively low-caliber opposition isn’t the most reliable benchmark, but Thomas Partey seems to really enjoy being the deepest man in the midfield. His defensive work last night was so good and helped keep the pressure on the full four. Again, the Holding / Mari partnership seems to have something going on, and that’s interesting for the manager when considering how to maintain defensive strength – especially in big games.

It was great to see Pepe make another solid contribution with a goal and an assist. Lacazette did the heavy lifting for the finish, to be fair, but Pepe’s run and movement in space played a big part in creating that chance. As for the forward, two more goals, and if he can keep scoring by the end of the season, the benefits are obvious. We may need him, depending on how long it takes Aubameyang to come back to 100%.

Credit also to the manager who has been rightly criticized this season for his poor results, but in a great game he found a way to make it work without players who have been key to our best performances this season. The football was good, the clinic final, and this part of the game that won it for us was so exciting because you can see what the future of this team should be like. The young players have raised the bar, and what they could do for us in the years to come gives us some great ideas.

Thus, a European semi-final awaits for the third time in four years. We’ve come so close to this competition in the past, which you wouldn’t give for the third time to be lucky. The reunion with Villarreal obviously has a bit of spice up because of who’s in charge there, so expect plenty of thoughts on that and Unai Emery in the coming weeks. It’s hard not to start to get a little bit of hesitation about this, but for now we’re going one game at a time – although I think Premier League side caps will start to show some influence from the Europa League in terms of rotation.

All in all a very good night, and a performance and result like that just throws a little marker. This team weren’t always this ruthless so it was good to have them exposed and to make progress.

Okay, let’s leave it there. James and I are going to record an Arsecast Extra for you this morning. If you have any questions or topics for discussion, send to @gunnerblog and @arseblog on Twitter with the hashtag #arsecastextra – or if you are on Arseblog Member on Patreon, leave your question in the # arsecast-extra-questions channel on our Discord server.

The podcast will be out mid-morning, by then calm down.