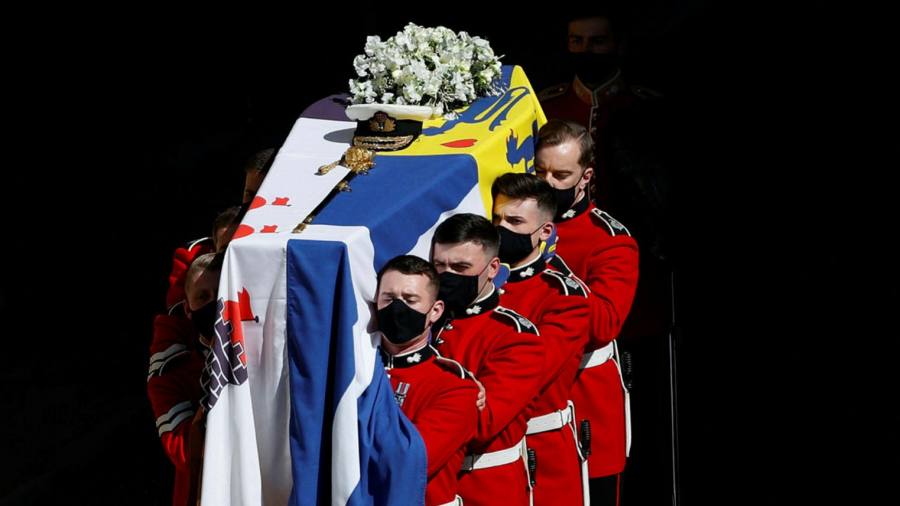 The Royal Family paid their final respects to the Duke of Edinburgh on Saturday at St George’s Chapel in Windsor.

The funeral, attended by only 30 family members in order to adhere to coronavirus restrictions, highlighted Prince Phillip’s ‘unwavering loyalty’ to the Queen as well as his ‘courage, courage and faith’ in service of the country and of the Commonwealth, Bishop David John Conner, Said the Dean of Windsor.

The Duke, who died on April 9 at the age of 99, was the longest-serving royal consort in British history after retiring from official duties in 2017.

Ahead of Saturday morning’s service, the Duke’s coffin was moved from the private chapel at Windsor Castle where he was lying idle at the entrance to the state.

The procession to St George’s Chapel for the 3 p.m. ceremony began at 2:45 p.m., with the Duke’s coffin carried on a Land Rover he helped modify and design.

Members of the Royal Family including Princess Anne and Prince Charles followed the casket on foot, as the Queen traveled in the back of the procession in a Bentley state, escorted by a maid of honor.

The procession route was lined with military representatives, including the Royal Navy, Royal Marines, and Royal Air Force. More than 700 soldiers attended the funeral.

The service, which began after a national minute of silence, paid tribute to the Duke’s service and was led by the Dean of Windsor. The Archbishop of Canterbury, Justin Welby delivered the blessing.

Speaking at the auction prayers, the Dean of Windsor said: “Our lives have been enriched by the challenges he has given us, the encouragement he has given us, his kindness, his humor and his humanity”.

The Archbishop of Canterbury reflected on the Duke’s “faith and loyalty” as well as his “high sense of duty and integrity”.

Buckingham Palace has said that while some elements of the funeral plan need to be changed, the general structure of the day has been in accordance with the Duke’s wishes.

No eulogy or sermon was read during the service. However, a choir of four pieces chosen by the Duke sang, including a 19th century hymn, Eternal Father, Strong to Save by William Whiting, which has ties to the Royal Navy.

The 30 chapel guests included the Queen and Camilla, Duchess of Cornwall, alongside Princes William, Prince Harry. The family did not wear military attire but opted for day dresses and morning coats with medals.

Members of the congregation wore masks and stood socially estranged, in accordance with coronavirus regulations. The queen sat alone during the service.

The public was also encouraged not to pay homage in person but to follow the coverage of the funeral on television or radio.

After the service, which lasted about 50 minutes, the Duke’s coffin was lowered into the royal vault.