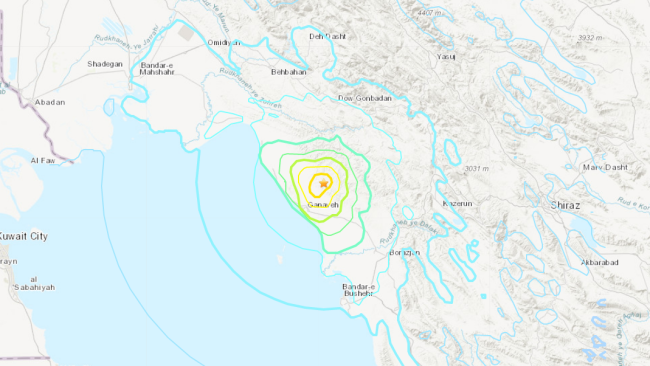 Several injured after the earthquake that shakes southern Iran

A major earthquake disrupted daily activities in parts of Iran on Sunday as the effects of the quake were extensive.

A magnitude 5.8 earthquake occurred Sunday afternoon local time in Iran’s Bushehr province, according to the United States Geological Survey (USGS). The epicenter of the earthquake was about 27 km northeast of the port city of Bandar Genaveh, the capital of Genaveh County in Bushehr Province and home to at least 60,000 people.

The tremors also caused landslides in the mountains of Genaveh County.

Fortunately, no fatalities were reported from Sunday’s earthquake, but reports of several injuries began to emerge shortly after the quake.

The region in which Sunday’s earthquake occurred is no stranger to minor earthquakes, but quakes over a magnitude of 5.0 often cause damage.

The Iranian Red Crescent (IRC) confirmed at least five injuries resulted from Sunday’s earthquake in the affected region. At least 10 IRC assessment teams were dispatched to affected areas on Sunday to investigate the damage.

Damage to buildings and houses across the province of Bushehr could be seen in images shared by local media. The earthquake also damaged at least one oil production facility in the region. The Gachsaran Oil and Gas Production Company (GOGPC) confirmed that Sunday’s earthquake damaged some of its oil facilities and disrupted oil production.

Iran’s Bushehr nuclear power plant, located about 100 km from the epicenter of Sunday’s earthquake, suffered no damage, the AP reported. This particular facility was built to withstand earthquakes with a magnitude of 8.0.

Any persistent showers in the mountains east of Bandar Genaveh on Sunday will start to dissipate overnight. As rescue and recovery efforts continue on Monday, largely dry conditions are expected along Iran’s southern coast.

In the middle of the week, occasional afternoon showers can develop over the mountains. These showers are expected to be light and brief, with little or no impact on the areas affected by the earthquake.

Check back regularly to AccuWeather.com and stay tuned to the AccuWeather network on DirecTV, Frontier, Spectrum, FuboTV, Philo and Verizon Fios.