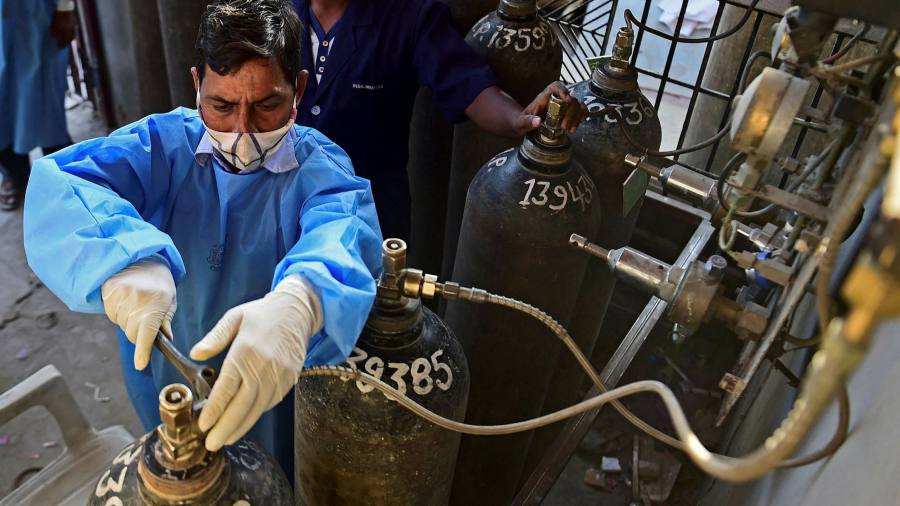 British Prime Minister Boris Johnson’s trip to India this month has been canceled as the country battles a new variant and an increase in coronavirus cases that are plaguing hospitals.

A joint statement by the British and Indian governments said the decision to drop the visit scheduled for next week was prompted by the “current coronavirus situation”.

The trip, during which Johnson hoped to discuss prospects for a closer trade partnership with India, was originally scheduled to last four days, but had been cut back. The two leaders will speak remotely instead, with plans to meet in person later this year.

The cancellation came as India’s capital region was put under lockdown and authorities banned the use of oxygen except for essential services, as the country battles an increase in cases of coronavirus which overwhelms hospitals.

The country continues to set one-day highs of coronavirus cases, reporting more than 273,000 new infections and 1,619 deaths on Monday, with the number of new cases increasing on average by 7% per day, one of the fastest rates of all the greats. country.

The push is believed to be related to a new B.1.617 variant that was first discovered in the country.

UK health officials are investigating whether the variant should be reclassified from a ‘variant under investigation’ to a ‘variant of concern’ after 77 cases were found in the UK.

“To move up the rankings, we need to know that this is about increased transmissibility, increased severity, or vaccine elimination, and we just don’t have it yet, but we are looking at the data. daily, ”Dr Susan Hopkins, a senior medical adviser from Public Health England, said Sunday.

Delhi officials have said it will impose a strict lockdown for a week, after Mumbai and other cities that have already put on traffic brakes.

Arvind Kejriwal, Chief Minister of Delhi, said that “oxygen has become a emergencyIn the region because his quota had been diverted to other states. He warned that there were “less than 100 intensive care beds” available.

The new restrictions were imposed even as Prime Minister Narendra Modi and his ruling party, Bharatiya Janata, staged huge political rallies and authorized religious festivals attended by tens of thousands of people without masks in recent weeks.

Amit Shah, Indian Minister of the Interior, told the Indian Express newspaper that he was “concerned” about the variant and that “the surge is mainly due to new mutants in the virus”. But he was “confident that we will win” against the disease and said it was not yet necessary to impose a national lockdown.

The shortage of beds in India forced authorities to re-establish emergency coronavirus hospitals in banquet halls, train stations and hotels that had been closed after the previous peak in September. Gujarat and Delhi state crematoriums operate 24 hours a day, while cemeteries lack burial space.

Coronavirus patients also find it difficult to access medication. More than 800 injections of remdesivir, an antiviral drug commonly used in India as part of Covid-19 treatment, were stolen from a hospital in Bhopal, Madhya Pradesh, over the weekend.

India is also facing a vaccine shortage and has frozen international vaccine exports to meet domestic demand. New Delhi on Friday pledged to increase monthly production of Covaxin, a vaccine manufactured by Indian manufacturer Bharat Biotech, to 100m from 10m by September. The government also said last week it would speed up approval of foreign vaccines in an effort to increase supply and allowed Russia’s Sputnik V for use in the country.

The majority of the more than 120 million Indians who have been vaccinated have received the Oxford / AstraZeneca jab made by the Serum Institute of India, the world’s largest manufacturer. The Serum Institute struggled to increase its monthly capacity to more than 60 million doses per month due to a fire at its plant earlier in the year and shortages of equipment from the United States.