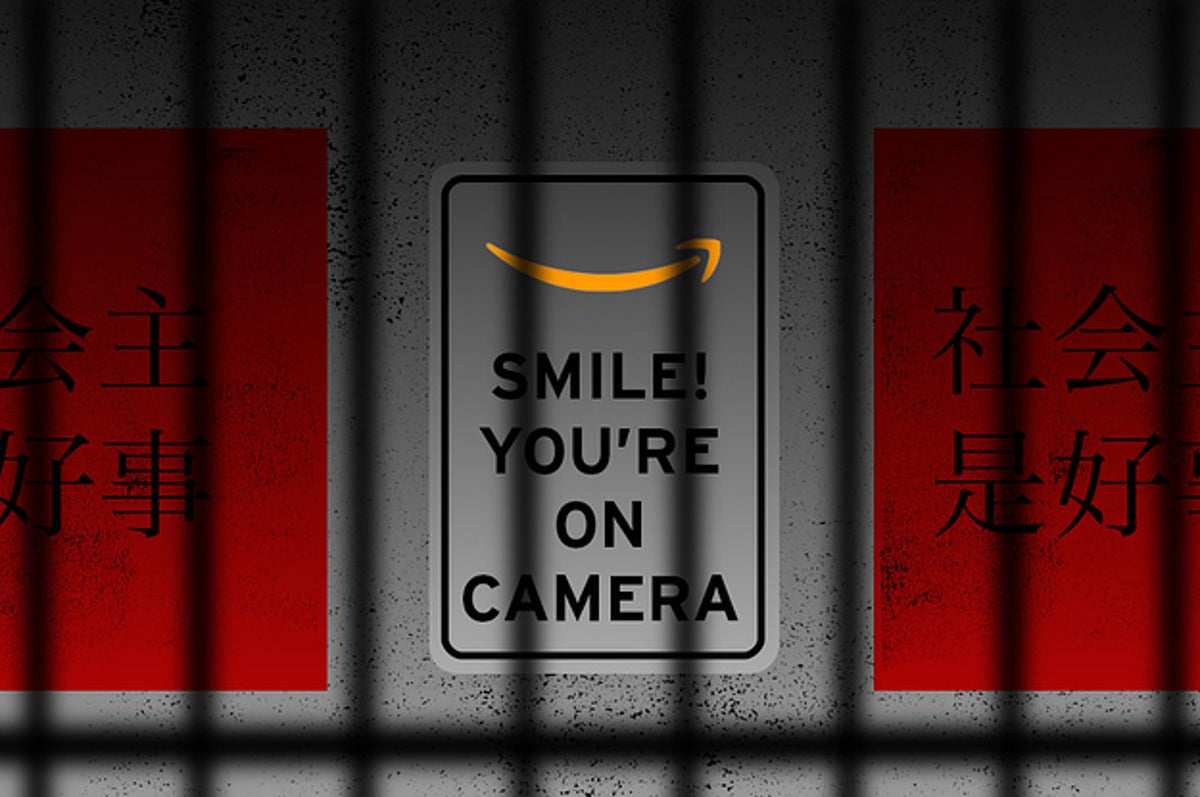 With an Amazon logo behind him and in front of him from the luminaries of Shanghai’s burgeoning venture capital scene, the executive on stage delivered his speech. His company, Renwei Electronics, helps Chinese authorities track prisoners and detainees – alerting guards to their movements and even equipping them with heart rate monitors.

Renwei is deploying its “smart prison” system in China’s Xinjiang region, where more than a million Muslim minorities have been locked up.

Still, that didn’t interfere with Renwei’s warm welcome to an event co-hosted by an Amazon-backed “joint innovation center” in November. Organizers of the event gave Renwei’s executive a platform to deliver an “investor tour” -type speech to some of China’s most prestigious investors. And Renwei received a “Product Innovation Award” recognizing it as one of six “Outstanding Entrepreneurial Enterprises”.

A growing list of multinational companies are under pressure to move their supply chains away from Xinjiang, amid mounting evidence of mass detention and forced labor in that country, as the United States and others countries recently called it a genocide. Congress is considering a bill to ban imports from Xinjiang tainted with forced labor, and US Customs has already banned tomato and cotton products in the region, among others.

Amazon shut down its e-commerce business in China in 2019, but other parts of its sprawling empire are still working with Chinese customers, including its highly profitable cloud computing subsidiary, Amazon Web Services.

AWS operates the joint innovation center with Shanghai local government and business organizations. The center energizes startups by providing them with AWS cloud resources and technical support, and helping them acquire talent and comply with government regulations, according to an announcement for the event. It is not known what benefits, if any, that Renwei and the other award-winning companies received. The centre’s website points out that the companies it supports also benefit from Amazon’s resources and reputation.

Horizon Advisory, a geopolitical consultancy based in Washington, DC, first took note of Renwei’s price and the Amazon event in a research shared with BuzzFeed News.

Renwei’s technology has been used in prisons across China, including Zhongjiazhuang Prison, located near the town of Shihezi. The prison is administered by the powerful Xinjiang Production and Construction Corps, a paramilitary and government organization that the United States imposed sanctions on last year, citing its links to human rights violations in the region.

BuzzFeed News located Shawan County Prison in Xinjiang using satellite images. An official prison photo released in 2016 shows a rounded entrance door made of elaborate ironwork and a lion statue to the left of the entrance. Behind the gate, a road leads to a two to three storey building. A white wall and a row of trees line the road. A Google Earth image shows the shadow of the door projected onto the ground, a light-colored object about 2.5 meters tall that appears to correspond to the lion statue, as well as the same wall and line of east-west trees. The roof of the building in the background also matches the photo.

The Chinese government has forced more than a million Muslim minorities, including Uyghurs, Kazakhs, Hui Muslims and others, into mass internment camps over the past four years. A BuzzFeed News survey last year found that the government had significantly stepped up its campaign since 2017, building hundreds of new complexes bearing the hallmarks of internment camps and prisons. Dozens of people previously detained there have described routine indoors abuse, deprivation and humiliation, ranging from overcrowding and starvation to beatings and even torture. The government claims that the internment camp system is intended for “transformation through education” and the de-radicalization of extremists.

Government data analyzed by the New York Times shows that Xinjiang’s prison population also exploded during this period – the region accounted for 21% of the country’s total arrests against just 2% of the population in 2017. Muslim minorities make up about the largest number of arrests. half of the population of Xinjiang. . Courts controlled by the Chinese Communist Party convict more than 99% of the defendants, according to government data.

Prisons in many parts of the world, including the United States, use data-driven systems to monitor and control prisoners. But in Xinjiang, the government’s campaign specifically targets ethnic minorities by detaining them for religious practices, ties to family abroad, or other behavior considered suspicious or threatening to the state.

Renwei describes its system as “an important platform for digital prisons to improve their management capabilities through information technology”. It uses image processing, data encryption, cloud computing and “big data” to set up a “personnel positioning system” that can be monitored remotely, the company explains. The data is routed to a centralized platform that authorities can use for “management decision making”.

Renwei says this improves efficiency and helps prison staff “realize new ideas for preventive prevention, mid-incident control and post-incident verification.” An early warning system signals when police are under attack, Renwei says, and when detainees enter areas that are closed to them. Inmates can be fitted with electronic devices that monitor their heart rate and other vital signs to “reduce the risk to law enforcement.” The system helps prevent people from escaping or committing suicide, Renwei says.

High-tech surveillance is a hallmark of life in Xinjiang’s camps and prisons. More than 20 people formerly detained there told BuzzFeed News that they were monitored in real time by cameras placed in the corners of their cells and even in the bathrooms. The guards could punish them for tiny offenses, such as speaking their native language instead of Mandarin Chinese.

Renwei also received recognition from the Chinese Internal Security Service, the Ministry of Public Security. The company participated in a ministry promotion conference attended by the deputy minister of the department and other government officials.

On stage at the Amazon event on November 16, 2020, the Renwei executive thanked the Shanghai-Amazon Joint Innovation Center for their support. Besides venture capitalists from Shanghai, the audience included executives from multinational giants such as Siemens and Kone Elevators, according to a press release on the event.

The executive spent about 11 minutes flipping through a PowerPoint presentation that explained every aspect of the business, noting that the system could be used not only in prisons, but also in detention centers. In the end, he turned to the investors and asked their questions. ●