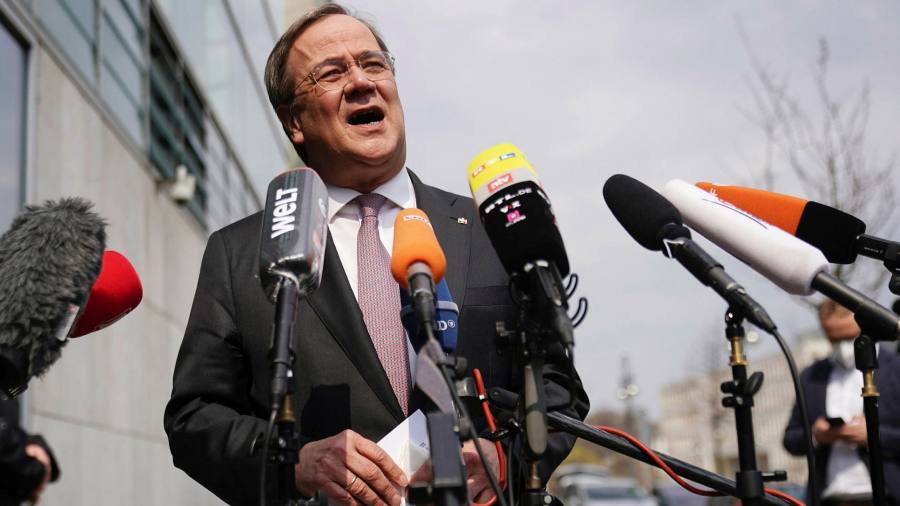 Armin Laschet was named German center-right candidate for chancellor in this year’s national elections, after his rival Markus Söder, the Prime Minister of Bavaria, threw in the towel.

Laschet has said he will campaign on a platform of change and innovation, promising a fresh start after Angela Merkel’s 16-year reign. “There can no longer be a status quo,” he told reporters. “As a country, we have to become better, faster and more modern.”

Laschet, leader of the Christian Democratic Union and prime minister of North Rhine-Westphalia, Germany’s most populous state, won in a battle with Söder which revealed deep divisions in the center-right movement .

Söder left the race for chancellor after a six-hour meeting of the CDU executive on Monday evening that took place for Laschet. In a secret ballot, 31 members supported the CDU leader while only nine voted for Söder.

“The die is cast,” Söder told reporters on Tuesday, announcing that he would put his weight behind Laschet as a joint candidate for the CDU and his sister Bavarian party, the CSU, which he leads.

The outcome of the power struggle is in line with the precedent: the CDU leader is traditionally a candidate for chancellor, representing both the CDU and the CSU. It was only twice in the history of post-war Germany that the two parties presented a candidate for joint chancellor of the CSU – and both times they lost.

But many CDU / CSU members are deeply concerned about the prospects of a Laschet candidacy. The CDU boss is much less popular than Söder, both among conservatives and among German voters in general.

Even top CDU leaders had doubts about Laschet’s suitability to run. The party executive backed his candidacy unanimously last week, but he only garnered 77.5% of the vote on Monday after a number of CDU heavyweights defected from the Söder camp .

The CDU was caught off guard by a sharp decline in its popularity with voters. It climbed to almost 40% last year as voters rewarded it for Germany’s skillful handling of the first wave of the coronavirus pandemic. But his approval rating dropped earlier this year as public anger grew over the slow pace of Covid-19 vaccinations and the revelation that some MPs were earning huge commissions on face mask purchase contracts . Laschet, 60, who was elected CDU chief in January, has so far been unable to stop the rot.

The CDU also faces a daunting challenge from the opposition Greens, who some pollsters say could win the September elections. The party chose Annalena Baerbock, a 40-year-old MP, as its chancellor candidate on Monday, in a fluid process that presented a stark contrast to the open struggle for power within the CDU / CSU.

Son of a minor, Laschet studied law and edited a Catholic newspaper before being elected to the Bundestag in 1994. He was minister in the government of North Rhine-Westphalia in the 1990s and became prime minister there in 2017 .

Laschet is an ideological ally of Merkel and has said that if elected chancellor he will continue his middle policy. He has long been considered his natural successor.

But his popularity suffered during the pandemic, when he appeared hesitant and erratic. In contrast, Söder, which has built a reputation as a decisive crisis manager, has seen its approval ratings skyrocket.

At Monday’s CDU executive meeting, Laschet was endorsed by some of the CDU’s most influential big names, such as Wolfgang Schäuble, the former finance minister and chairman of the Bundestag.

But other participants, such as Peter Altmaier, Minister of the Economy and a close ally of Merkel, threw their weight behind Söder, a move that will seriously undermine Laschet’s authority.

Laschet made an effort on Tuesday to mend the fences between the CDU and CSU. The two parties were, he said, “sisters, a unique phenomenon in the history of political parties in Germany. . .[and]the anchor of stability of our republic ”. He said Söder would continue to play a “central role” in German politics and that he would liaise closely with him on political issues.

Söder said it was time to close ranks around Laschet. “Only a united CDU / CSU can succeed,” he added. “We don’t want any division.” He said he called Laschet to congratulate him on his selection.

Markus Blume, CSU general secretary, said it had become evident that Söder was “the candidate of the hearts of the people”. “But in a democracy, it is the majority that decides,” he added.