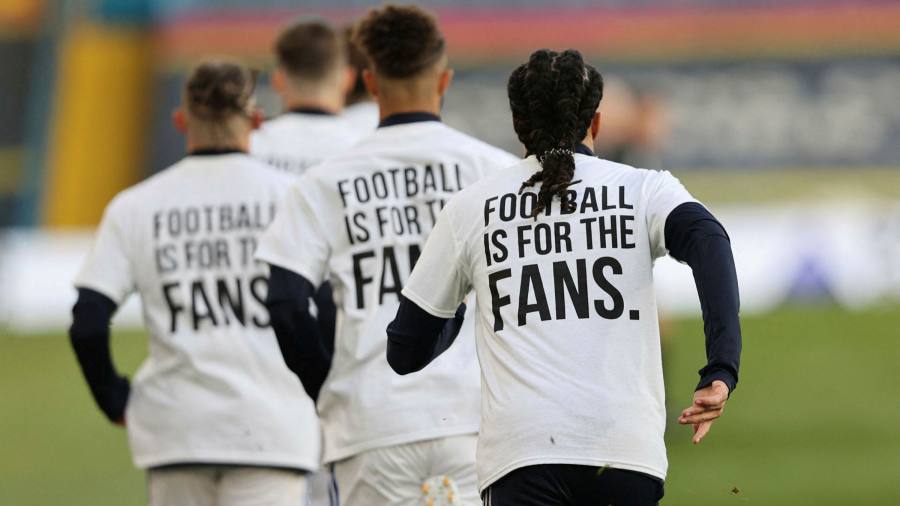 Chelsea and Manchester City are preparing to withdraw from the European Super League after rival football clubs, managers, players, fans and politicians united to oppose the controversial plans.

Both English clubs have started the process of withdrawing from the new league, according to people briefed on the decision, while other clubs have also reconsidered their participation in the separatist competition.

The move came after 12 clubs from England, Spain and Italy signed binding contracts to enter the Super League last weekend. This means Chelsea and Manchester City officials have to prepare documents to leave the pact.

The decision to step down signals the first outward signal of discontent between rebel clubs, which have been condemned by the international community for their involvement in a project that threatens to overthrow the hierarchy of the world’s favorite sport.

Chelsea and Manchester City declined to comment. The Super League did not immediately respond to requests for comment.

Earlier on Tuesday, the English Premier League vowed to take action against its member clubs who have joined the new competition.

Following a meeting of the 14 top clubs not involved in the proposal, the Premier League said it was considering “all actions” to prevent the project from progressing and threatened to hold the six breakaway clubs to account. The clubs said they “strongly and unanimously rejected” the plans.

Arsenal, Chelsea, Liverpool, Manchester City, Manchester United and Tottenham Hotspur, the English clubs which are among the founding members of the Super League, were not invited to attend the meeting.

The Super League got an early legal advantage on Tuesday in a Madrid commercial court in a ruling following a claim filed by the group.

A judge has issued interim measures restricting any action FIFA, the world’s soccer governing body, and UEFA, which governs sport in Europe, could take against the Super League. The ruling means football federations and their members could be prevented from applying sanctions against clubs and their players.

The Premier League, La Liga and UEFA declined to comment. Fifa did not immediately respond to requests.

The UK government has launched a review which culture secretary Oliver Dowden said would examine how to give fans an “even greater voice in overseeing the game.”

Premier League club West Ham United, currently in line to qualify for next season’s Champions League, have said they “will do everything they can. . . to resist this attack on football in the best interest of our club and the game we all love ”.

The Super League, with 15 permanent members including Spaniards Barcelona and Real Madrid and Italians Juventus, AC Milan and Inter Milan, would only include five more qualifying spots, making it much more difficult for clubs such as West Ham to enter. The UEFA Champions League, the continent’s most prestigious club tournament, is open to England’s top four teams each season.

The threat of tangible, coordinated action against Super League clubs is the next step in a growing crisis in European football, with British Prime Minister Boris Johnson tweeting that “no action is off the table and we are exploring all possibilities to ensure that these proposals are finalized ”. He met with Premier League officials to discuss the matter on Tuesday.

UEFA has reiterated its condemnation of the Super League and is consulting its lawyers to consider sanctions.

UEFA president Aleksander Ceferin has threatened to ban separatist sides from this season’s Champions League, while UEFA and world organization Fifa have said the players could be barred from representing their country in international competitions.

James Milner, the Liverpool player, has voiced his opposition to the plan, telling the BBC: “I don’t like it at all and hope it doesn’t happen.”

Manchester United striker Marcus Rashford known for his campaign efforts around free school meals, tweeted that “Football is nothing without the fans”.

Manchester City manager Pep Guardiola also voiced his disapproval, saying at a press conference on Tuesday that “sport is not a sport if losing doesn’t matter”.

Nasser Al-Khelaifi, the president and general manager of Paris Saint-Germain, champion of France, said that “any proposal without the support of UEFA. . . does not solve the problems the football community is currently facing, but rather is motivated by self-interest ”.

Florentino Perez, president of Real Madrid, the key driver of the launch of the Super League and its first president, however said that the competition “will save football”.