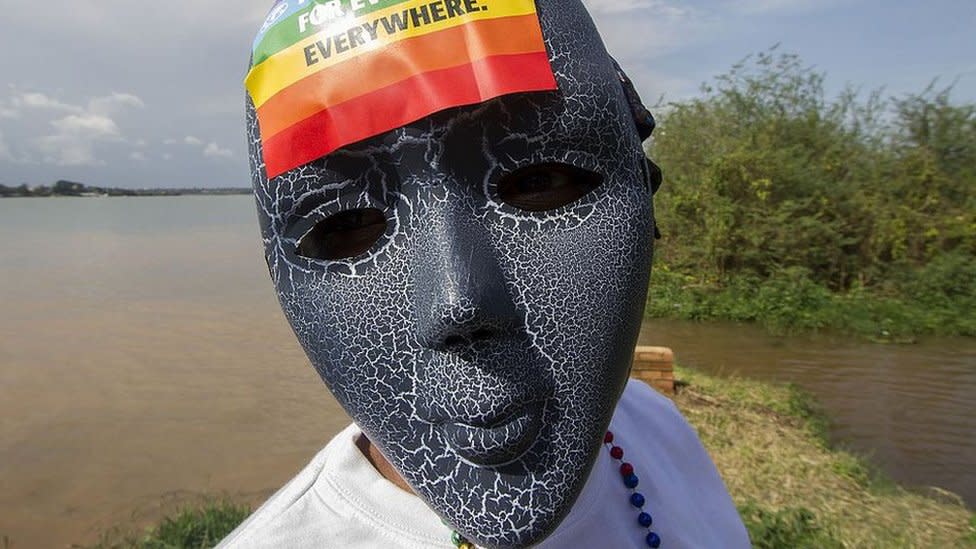 Ugandan mom who was once ashamed of her gay son

When Rita heard rumors that her son was gay, she refused to believe him.

At the time, she thought homosexuality was an abomination – a “problem” happening elsewhere, not in Uganda.

When she finally realized the truth, she sensed that something bad had taken over her own home.

“When I confirmed it, I cried. I cried because I couldn’t believe it… I locked myself in and cried,” she told the Comb podcast of the BBC.

But the battle for gay rights is often seen as a situation with two clear sides – LGBTI people on one side and homophobic communities on the other.

The reality is much messier, with parents like Rita caught in the middle – between the firmly held beliefs they grew up with and the plight of those close to them.

‘Rumors about my son’

A group in Uganda is trying to help parents like Rita understand and accept their children, and deal with the challenges and trauma of homophobia.

Rita discovered the rumors surrounding her son through a friend, who had heard people say he was gay.

She was upset and started to wonder if there had been any signs that she had missed.

Eventually his son confirmed that it was true that he was gay.

With friends and neighbors talking about the family, Rita locked herself in the house to escape gossip and public shame, while her son’s father blamed her, saying she had failed as a mother.

Eventually, she said that she “calmed down”, realizing that no one else would be looking after her son, and she tried to find a way to deal with the situation.

Rita found herself totally alone at a time when she needed advice and support. A turning point for her came when her son heard about the new support group and encouraged her to attend.

The group is called PFLAG Uganda, which stands for Lesbian and Gay Parents and Families. Its goal is to create a safe space where parents can meet with other people who are in the same situation, ask questions and have conversations they would normally never dare to.

The founder of the group is Clare Byarugaba, an openly lesbian LGBTI activist who was inspired by the experience of her own family.

Clare was exposed by local tabloids before speaking to her family about her sexuality. She had no warning and no way to prepare her parents to learn the truth and face the shame that came with the revelations.

For Ugandan homosexuals, one of the most painful costs of their sexuality can be the rejection of families.

Clare’s belief is that for LGBTI people who are already so vulnerable in a country where homophobia is rampant, home should be the safest place, where they can always come back and feel fully accepted.

But in order to achieve this, Clare realized that parents need support as well.

She felt compassion for what her parents were going through, being essentially revealed as the parents of an LGBTI child – considered one of the greatest sources of shame in Uganda.

Not the only one

She realized that the kind of support and solidarity she could draw on within the LGBTI community was not available to parents, whose experiences and perspectives were so different.

Clare looked to the PFLAG movement that started in the United States and adapted it to the local context.

The goal is to provide a safe space where parents can talk to a clinical psychologist and progressive religious leaders, as well as their peers.

Meetings are conducted in the Luganda language and, in addition to peer support, the group provides access to accurate information on homosexuality and practical advice on how to cope with a homophobic environment.

The group first met at the end of 2019, with nine mothers and one father in attendance.

Each member spoke about their story – how they learned their child’s gender or gender identity, how he felt then, and how he is now.

Clare remembers her emotions seeing the parents who had entered the room so nervously. How they first met, heard such similar experiences, and realized that they were not alone.

She describes the feelings they shared during this session as tantamount to grieving their children.

Rita was one of the inaugural members of the group and attending the meetings changed her:

“I couldn’t believe an organization even cared about us parents.

“I was very happy to see other parents like me sitting at a table. Everyone you watched had given birth to a child like mine.

Support from other parents helped her stop listening to rumors and restore the mother-son relationship she felt she had lost.

She even started giving him relationship counseling again, as she would with her other children.

Clare says the progress in the group has been visible in simple things like changes in the type of language parents use.

“At first they used derogatory terms to describe their children. Now their language has become, ‘Yes, this is my child. He’s my child, ”she said.

For some members, like Rita, understanding their own children has also made parents think differently about the rest of the LGBTI community in Uganda.

Having initially thought that homosexuality was an abomination, Rita now feels protective of all LGBTI people in Uganda.

The past year has seen the intensification of homophobic discrimination, with measures around the coronavirus pandemic allowing an increase in raids and harassment carried out under the guise of public health measures.

With Uganda’s LGBTI community even more vulnerable than usual, Rita has even welcomed people into her home.

She also now has the confidence to talk to other parents, to help them cope with the situation they find themselves in.

“I advise parents who have such children to accept them first.

“Accept your child knowing that he is who he is and that he will not change… he is not another person’s child. If you don’t accept it, neither will the world.

“It is your strength and your acceptance as a mother that gives strength to your child.”

* Rita’s name has been changed to protect her identity