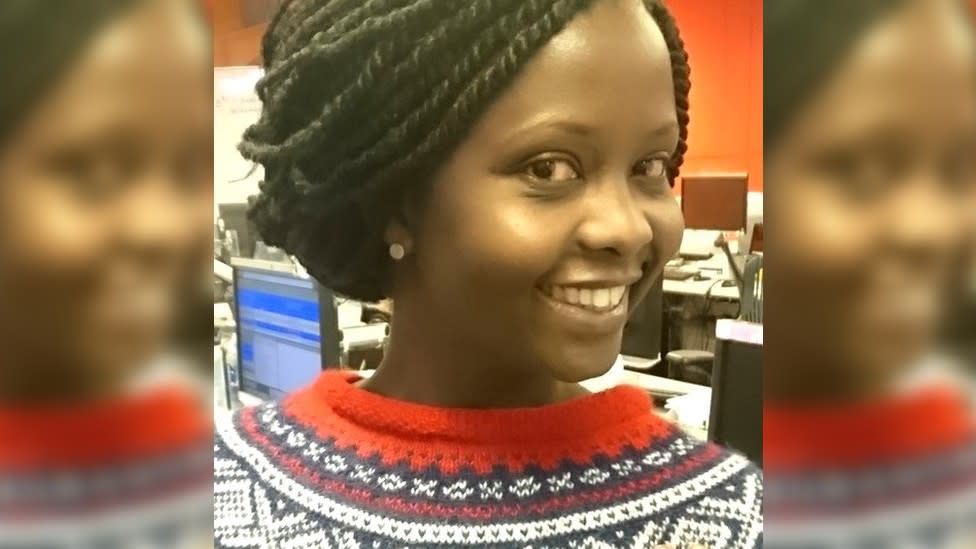 Trauma, genocide and my invisible disease

I have an invisible health problem that we don’t often talk about.

This is the first time that I have described my problem, which is deeply personal and has remained hidden from many of my friends and colleagues for years.

But the truth is, for much of my life, I didn’t know I had the disease or what it was called.

Now I recognize that after experiencing the genocide as a child growing up in Rwanda along with other disturbing events, I have post-traumatic stress disorder, also known as PTSD.

It triggers panic attacks which can happen at any time and make it hard for me to breathe. I’m usually covered in a thin layer of cold sweat when they go away, as I struggle to get back to my “normal” self.

Looking back, I was your usual happy child, having grown up in the 1980s initially in a small supportive family in the capital of Rwanda, Kigali.

Basically it was me, my mom and my little brother, Junior.

But this little angel wouldn’t live until his first birthday, and his death, when I was about two years old, from a severe cough disease would be my first real sense of loss.

I couldn’t understand the emptiness I felt, because I was a child myself, but over time I came to see this as the possible start of my journey, the genesis of my PTSD.

The second heartbreaking event occurred when I lost my mother to illness two months before I was 10 years old.

I still remember being in bed with her in the hospital, wanting to be near her because I loved the way she smelled of the sun. But when I touched her skin, it was very dry. It was as if there was no more of her because she had lost so much weight.

After his death my world as I had known it until then was over, but I didn’t cry because I just had to keep things going. I moved in with my aunt – whom I now call my mother – and five cousins, who were all very supportive.

Then, in April 1994, when I was 12 years old, my life was completely turned upside down by the genocide.

In just 100 days, 800,000 people are said to be killed by Hutu extremists who targeted members of the Tutsi minority community, as well as their political opponents, regardless of their ethnic origin.

At the sound of gunfire, we fled Kigali for Gisenyi, a town near the border with the Democratic Republic of the Congo.

But violence followed us and during our travels around Gisenyi, we were often stopped at roadblocks by militiamen. They once caught my little sister Nelly, but my mother dissuaded them from killing her.

It was a scary moment, when I realized that these people – who looked drunk and out of their minds – could do anything to us.

Some were quite young, but they had machetes, they had wooden clubs and some of them had blood on them.

It’s something that will stay with me forever.

Learn more about the genocide in Rwanda

We then crossed the border and became refugees in the Congolese town of Goma. I witnessed more deaths there as people died from cholera and dysentery and bodies piled up on the side of the road.

All this time and then our move to Kenya and finally, when I was 16, to Norway, where we were resettled, I was in survival mode.

It is a psychological condition that helps people cope with stress, but if you live with it for too long it can be damaging.

However, once in Norway, when I started to feel more relaxed, the panic attacks started and a psychologist identified that I was suffering from PTSD.

Of course, I am not alone.

More than one in five people who have lived through war in the past decade would suffer from some type of mental health problem, including PTSD, according to the World Health Organization.

And the condition can be the result of many types of traumatic events.

According to the medical journal of the Public Library of Science, people living in sub-Saharan Africa are disproportionately exposed to trauma and may be at increased risk for PTSD.

But in many countries mental health care and support is often lacking or very limited.

Take the example of Sierra Leone, which has been through so much – a decade-long civil war, natural disasters that killed hundreds and an Ebola outbreak in 2015 that left nearly 4,000 dead.

WHO estimates that 10% of the country’s seven million people have mental health problems, but only a small percentage are able to access mental health services.

“[When the war ended] there has been a lot of talk about reconciliation and peacebuilding, ”said Dr Rebecca Esliker, clinical psychologist at Makeni University in the country’s northern province.

Speaking to the BBC podcast The Comb, Dr Esliker added that shortly after the war NGOs and other international organizations visited Sierra Leone and did two or three weeks of work on what ‘she calls “crash courses” to train people in counseling.

She argued that this would not have been enough to help Sierra Leoneans cope with the trauma they have suffered and that, therefore, the country continues to bear the consequences of all untreated trauma, even at this time. day.

“We see people trying to cope, especially those who were young during the war. We see a lot of people struggling with serious mental disorders, which sometimes lead to a lot of assault, fighting and domestic violence. “

When I hear this, I feel lucky.

I did not present the symptoms in the manner described by Dr Esliker, but I know a lot of them.

I am also one of the lucky ones to have lived in countries where mental health care can be easily accessible and sometimes inexpensive.

But even in most developed countries, mental health issues remain widely stigmatized.

In a 2015 study in the UK, nearly nine in ten people with mental health problems said the stigma they faced negatively impacted their lives.

It took me over 30 years to say loud and clear that I have PTSD, and if I hadn’t told you, you wouldn’t have known it.

It is important to talk about these things honestly and without shame. So maybe more people will seek the help they need.