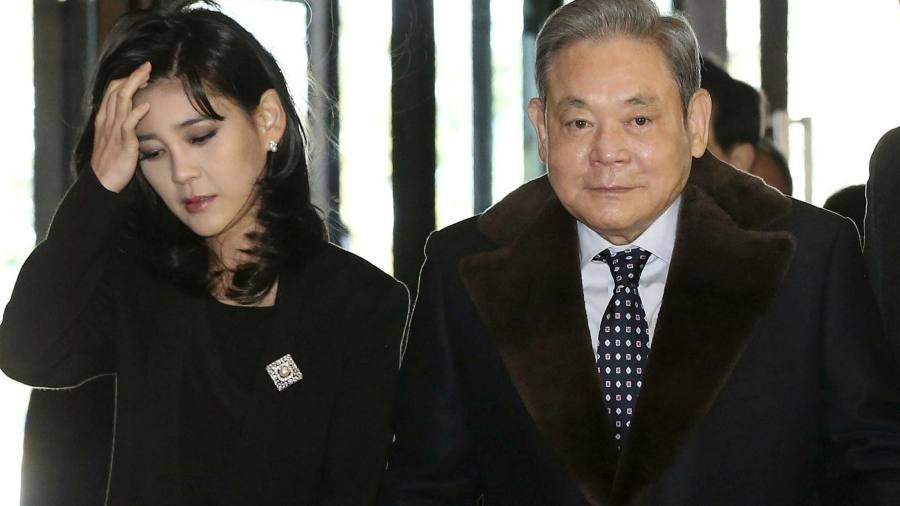 The family of late Samsung patriarch Lee Kun-hee pledged billions of dollars in health spending and art donations and pledged to pay $ 11 billion in one of the biggest inheritance tax bills in the world.

After Lee’s death in October, South Korea’s most powerful family had six months to brief tax officials on how they would handle the estate of the country’s richest man, including a bill for 60% on inheritance tax on his $ 20 billion fortune.

In a rare public statement, the family on Wednesday announced a series of philanthropic donations, including hundreds of millions of dollars for childhood cancer treatment, an infectious disease hospital and vaccine research.

The family will also donate Lee’s cache of 23,000 works of art and antiques to South Korean museums. The personal collection includes masterpieces by Salvador Dalí, Claude Monet and Pablo Picasso as well as famous Korean artists such as Park Soo-keun, Lee Jung-seop and Kim Whan-ki.

The Samsung Group, which began its life in the fish and dried vegetable trade in the 1930s when Japan ruled the Korean Peninsula, is one of the world’s leading producers of computer chips and smartphones among countless devices. and electronic components.

Lee was the second-generation Samsung president who led the company’s radical transformation into a global technology powerhouse.

The donations, said the family, “will preserve their legacy and help create a better society.”

The family has also pledged to pay the more than Won12tn ($ 11 billion) in inheritance taxes in full. The taxes will be paid in six installments over a five-year period, they said.

“It is our duty and civic responsibility to pay all taxes,” they said, also noting that “the payment of inheritance tax is one of the largest ever paid in Korea and around the world, ie three to four times the [South Korean] total government tax revenues last year ”.

No further details were provided.

The family’s public image has been clouded by the January imprisonment of Lee Jae-yong, the son of the late president who heads Samsung, for corruption related to his estate.

According to local analysts and people familiar with the situation, the family planned to pay most of the bill initially with bank loans secured by their own stakes as well as cash from higher dividend payments from the group’s units. Samsung. Lee Kun-hee’s estate includes stakes in Samsung Electronics as well as small businesses such as Samsung Life Insurance and Samsung C&T.

Park Sang-in, an economics professor at Seoul National University, said the family did not appear to have come to an agreement on how to divide the inherited stocks due to Lee Jae-yong’s imprisonment.

Analysts have not ruled out the Lee family having to divest part of its stakes in Samsung companies, a prospect that could present rare opportunities for foreigners to seize the conglomerate.

However, control of Samsung Electronics, the crown jewel of the family’s business empire, is expected to remain with Lee Jae-yong.

“There won’t be a big problem paying the bill in installments. They can increase dividend payouts from Samsung companies, take out bank loans with their equity interests as collateral and sell some equity interests in minor companies, which will not affect their hold over large units, ”said the head of a company. local brokerage house who asked not to be named.