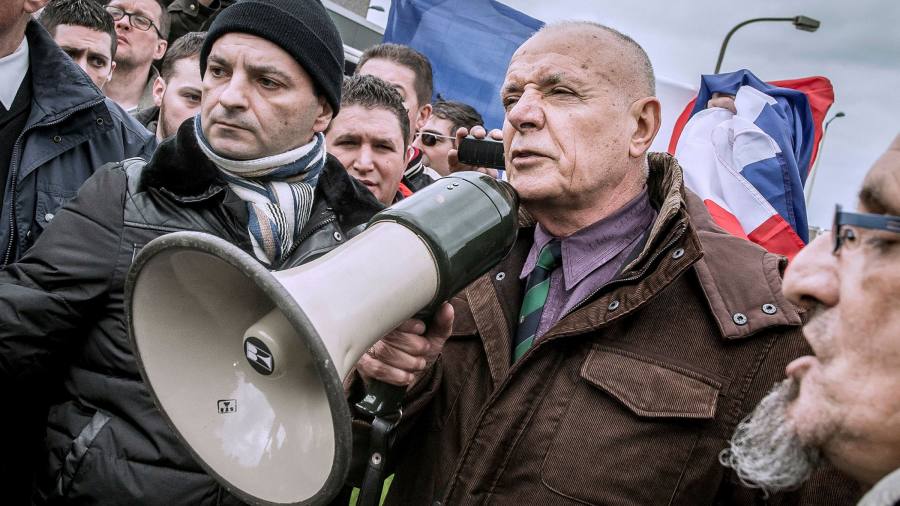 The French military command and government have vowed to punish active officers and force right-wing reserve generals into full retirement for signing an inflammatory statement mourning the “disintegration” of France due to Islamist radicalism and “hordes” of immigrants in the suburbs and alluding to a coup d’état.

Published last week in the right-wing magazine Valeurs Actuelles on the occasion of the 60th anniversary of an unsuccessful generals’ putsch against Charles de Gaulle aimed at keeping Algeria within the framework of France, the inflammatory statement was initially rejected by the authorities as eccentric nationalist nostalgia for retirees in their eighties.

But it quickly emerged that at least 18 active military personnel were among the thousands of signatories, while far-right leader Marine Le Pen – who is shown by opinion polls as Emmanuel Macron’s main rival for the presidency in next year’s elections – approved his veiled call to arms.

Sign up here to receive Europe Express, your essential guide to what’s going on in Europe, delivered straight to your inbox every day of the week.

“These are serious times, France is in peril,” the statement said. “Know that we are ready to support politicians who will take into account the need to preserve the nation. . . If nothing is done, laxity will continue to spread inexorably in society, ultimately causing an explosion and the intervention of our active comrades for a dangerous mission of protecting our civilizational values.

Le Pen said she agreed that “it was the duty of all French patriots, wherever they came from, to stand up to restore – and even save – the country”, while stressing that the struggle must be political and peaceful.

General François Lecointre, the armed forces chief of staff, said the main signatories had retired 20 or 30 years earlier, but there were also 18 active members – including four officers – among those who signed. They would be punished based on their seniority level, while generals who are no longer active but can be called up as reservists would be forced to take full retirement.

“This is an exceptional measure, which we are going to launch immediately at the request of the Minister of Defense,” he told Le Parisien in an interview.

“At the beginning, I thought to myself that it was not very significant, then that the authors knew very well that they were taking a political position. I cannot accept it, because the neutrality of the armed forces is essential. But then I was shocked to read there a call to active soldiers: I find that repugnant.

Lecointre particularly criticized Christian Piquemal, the former head of the French Foreign Legion. Piquemal had already been forced into full retirement five years ago for participating in an illegal demonstration against immigrants in Calais.

Jean Castex, Prime Minister, condemned the statement after Wednesday’s weekly cabinet meeting, saying it was “contrary to all our Republican principles”, and criticized Le Pen for his “unacceptable” exploitation of the controversy for reasons policies.

Florence Parly, Minister of Defense, said on twitter that Le Pen’s support “reflects a serious misunderstanding about the institution of the army, which is worrying for someone who wants to become commander-in-chief”.

The French left has long been concerned about the level of support for the far right in the French police, gendarmerie and armed forces, although some recent elections – for example the 2019 European elections – suggest that the Rassemblement national de Marine Le Pen is also the most popular single political party in the country as a whole.

A Harris Interactive opinion poll for LCI showed that 58% of French voters polled supported the military who signed the controversial statement, compared to 42% who opposed it.

Among respondents who said they supported a political party, 86% of RN sympathizers supported the soldiers. For the center-right Les Républicains party, support was 71%, and even in Macron’s La République en Marche party, it was 46%.