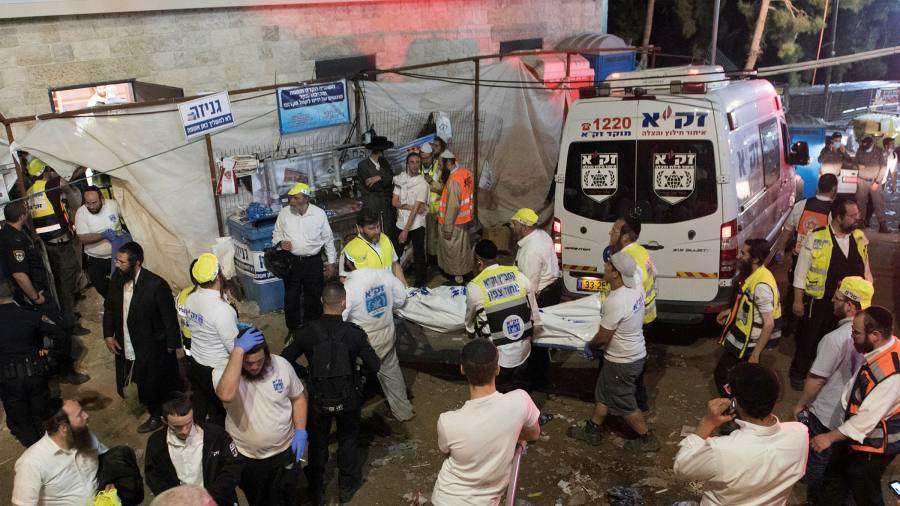 Dozens crushed to death at Jewish festival in Israel

At least 38 people were killed and many more injured in a stampede at the grave of a Jewish sage in northern Israel, according to local rescue services and media.

The Israeli army was assisting civilian rescuers during the “mass casualty event.” Footage of the Mount Meron scene showed that part of the stadium where ultra-Orthodox worshipers celebrated the Lag B’omer festival had collapsed.

Separate reports said overcrowding led to a stampede, citing survivors. An Israeli ambulance service spokesperson told Ynet News that most of the deaths were due to severe overcrowding.

“We thought there might be a [bomb] alert on a suspicious package. No one imagined that could happen here, ”a pilgrim told a local news channel.

Tens of thousands of devout Jews had gathered at the tomb of the 2nd century sage Rabbi Shimon bar Yochai for the Lag B’omer festival, which traditionally involves a night of prayer, dancing and bonfires.

Last year’s event was halted due to Covid-19 restrictions. This year, as tens of thousands of people made their way to the pilgrimage, authorities tried to limit the number of bonfires before warning that the risk of coronavirus was quickly becoming too great to manage.

Israel’s ultra-Orthodox minority is a crucial backbone of Prime Minister Benjamin Netanyahu’s coalition. Amir Ohana, Minister of Public Safety, visited the site before the crash, wishing the crowd happy holidays and thanking the police for their help on the pilgrimage, the Associated Press reported. Netanyahu called the incident a “grave disaster”.

At least 100,000 people were expected at the site earlier in the evening, making it Israel’s largest public gathering since a mass vaccination campaign allowed the country to reopen. Media said police had already driven people away from the site before the crash.

About 5,000 police have been deployed to enforce coronavirus restrictions at the mystic’s grave after health officials warned the event could be a coronavirus risk.

Scuffles erupted earlier in the evening between police and ultra-Orthodox participants as authorities attempted to enforce a green passport system to separate the vaccinated from the unvaccinated, according to videos on social media.

Helicopters evacuated the injured to local hospitals, where TV news channels showed tents were pitched to treat the injured.

Witnesses reported a huge crush of people in which participants were suffocated.

A rescue worker told a local radio station that attempts to save trampled people in the crowd were hampered by debris and warned more victims could be buried below.