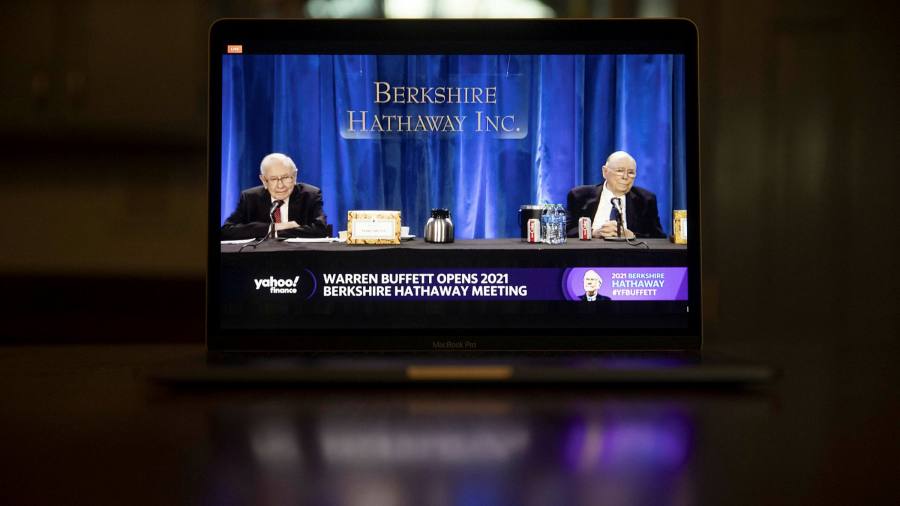 Warren Buffett opened the Berkshire Hathaway annual meeting on Saturday with an optimistic assessment of the US recovery from the pandemic, saying business was “very good” in parts of the economy.

In his annual address to Berkshire shareholders, the 90-year-old dean of the investing world said that American capitalism “has worked incredibly well.”

“This has been a very unusual recession,” Buffett said. “Right now, business is really very good in many segments of the economy. . . but there are still problems if you are in a few types of businesses that have really been wiped out. “

Berkshire itself – worth around $ 631 billion – ranks among the largest publicly traded companies today. The value was driven by the growth of the dozens of companies it owns and a rise in the value of its equity portfolio, which was worth $ 282 billion at the end of the first quarter.

But the company’s lack of trading in recent years, and the fact that it was a net seller of shares in the first quarter, led to several questions from investors, with one shareholder telling Buffett that “you sat on your hands “during the crisis.

Buffett defended the company’s decisions, saying it could have struck a deal, but before the Federal Reserve intervened last March, Berkshire was primarily focused on sustaining and funding its own businesses.

Berkshire vice chairman Charlie Munger added that it would have been “crazy” to expect the company to make an acquisition at the height of the crisis.

Buffett added that the company sold its airline stakes in part last year because it didn’t believe the companies, which included companies like American and Delta, would have received the same government funding if they had a wealthy shareholder like Berkshire in the country. their register of shareholders.

“Imagine if Berkshire owned 10% of the airlines and they [the government] said to get it from Berkshire, ”he said. “Maybe you didn’t get the same result and I think you didn’t. You could see the headlines. “

Buffett warned the company would struggle to compete on acquisitions, a theme that persisted at recent annual meetings, especially given the rise of special purpose acquisition companies.

“Spacs typically have to spend their money in two years,” he said. “If you put a gun on my head and say you have to buy a business in two years, I would buy one, but it wouldn’t be a lot.

He added, “Frankly, we’re not competitive with that.”

Today deviates from what Berkshire shareholders might have expected before the pandemic forced the company to move to a virtual format. Buffett and Munger were joined on stage by Greg Abel and Ajit Jain, the two men nominated by shareholders as potential successors.

Abel and Jain were given a greater proportion of screen time at the event, which is typically “ The Warren Show, ” than ever before. The pair were asked if they had anything like the special relationship that characterized Buffett’s relationship with Munger. The answer was a categorical no.

“There is no doubt that Warren’s relationship with Charlie is unique and that it cannot be replicated by Greg and I,” Jain said, although he added that he had “a lot of respect.” for Abel. “We don’t interact as much as Warren and Charlie, but we do talk to each other quarterly.”

Abel joined Buffett in defending the board’s view that shareholders are voting against two shareholder proposals that would push Berkshire to disclose its efforts to tackle climate change, diversity and inclusion in the workforce.

Sitting in front of a box of See’s Candies, a Berkshire subsidiary, Abel said the company’s large energy division has already made a significant effort to decarbonize its business. He noted that the unit planned to shut down all of its coal-fired power plants by 2050, including 16 between 2021 and 2030.

He was less categorical than the man he could one day replace.

“It’s stupid in our opinion,” said Buffett. “For the folks at BusinessWire or Dairy Queen, all of these places to fill out reports to make a joint report. . . we don’t do that in Berkshire.

Several large investors disagree. The California Public Sector Employee Retirement System and asset manager Neuberger Berman have said they will suspend the votes of several directors for re-election to the company’s board of directors on Saturday.

Others, including one of the company’s major shareholders – Norges Bank – have approved both shareholder proposals. The proposals face an uphill battle nonetheless, given the company’s two-class structure and Buffett’s large stake in its high-voting stocks.

Ron Olson, director of Berkshire and partner at law firm Munger Tolles & Olson, told Yahoo Finance on Saturday he expected both proposals to be rejected.