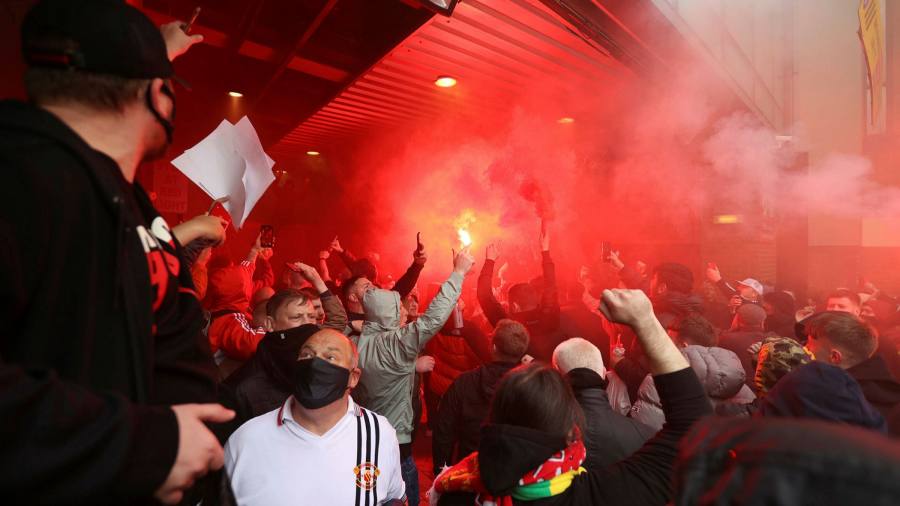 Manchester United fans broke into the English football club’s stadium and onto the pitch on Sunday to protest against team owners American billionaire Glazer family and their thwarted plan to join the abandoned breakaway Super League.

Old Trafford fans chanted, set off flares and unfurled banners calling on the Glazers to get out of Manchester.

The protests led to the delay and then postponement of the club’s game against Liverpool, which is owned by Fenway Sports Group of John Henry, another US investor who apologized to fans for his support for the Super League.

Fans have “the right to free speech and peaceful protest,” Manchester United said in a statement. “However, we regret the disruption of the team and the actions which put other supporters, staff and the police at risk.”

The Premier League added: “We understand and respect the strength of sentiment, but condemn all acts of violence, criminal damage and trespassing, especially given the associated Covid-19 violations.”

Team co-chair Joel Glazer apologized last month after being forced to call off his plans to form a breakaway Super League for an elite group of Europe’s best-known football clubs, including the Spanish Real Madrid and Italian Juventus.

According to the proposals, the founding clubs would have been guaranteed a place in the league every year, which goes against the tradition of European football in which clubs compete against each other to take part in high-level competitions.

Fans remain angry that Manchester United have backed the Super League. Their dissatisfaction with the Glazers dates back to the family’s acquisition of the club in 2005, a £ 790million leveraged buyout that plagued them with debt, costly fees and interest payments. The family also derives dividends from the club, a rarity in football.

Gary Neville, former Manchester United player and influential expert, told Sky Sports it was the right time for the Glazers to sell the club, which have failed to win the Premier League since 2013.

“It would be the honorable thing to do,” he said.

Ahead of the game, Manchester United executive vice-chairman Ed Woodward, who announced he would step down at the end of the year after the frigid Super League reception, apologized to fans for the role of the team in the abandoned project.

“I can assure you that we have learned our lesson. . . and we are not looking for any revival of Super League plans, ”he told supporters at a meeting on Friday.