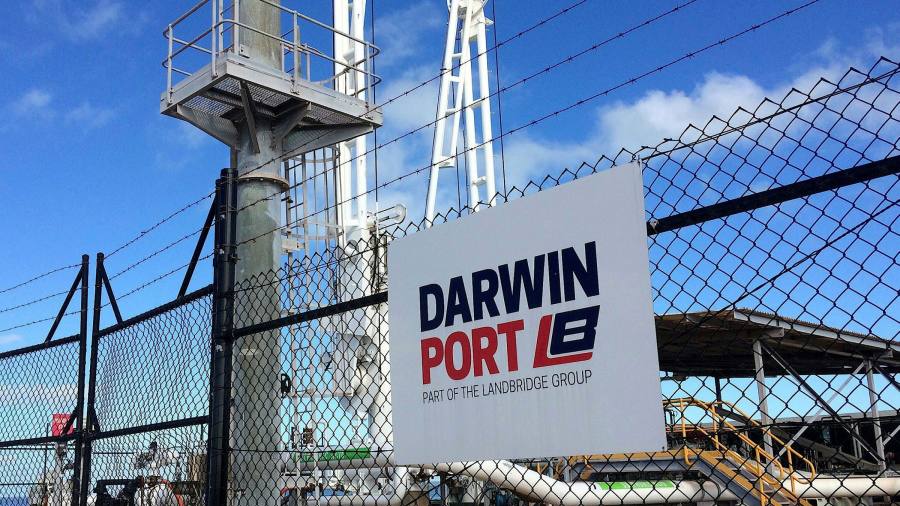 The Australian Ministry of Defense is examining the advisability of canceling a disputed lease to a Chinese company from the port of Darwin, located near a US Marine base.

Washington has long expressed concern over the 99-year lease, which was sold by the Northern Territory government to Shandong-based Landbridge for A $ 506 million in 2015.

The review was announced following a sharp deterioration in relations between Australia and China, which prompted Canberra to tear up two Belt and Road Initiative agreements between the Chinese and Victorian state governments last week. .

Peter Dutton, Australia’s Defense Minister, confirmed the lease revision in an interview with the Sydney Morning Herald on Monday, saying he had asked his department to “come back with some advice” to make sure the government could “Examine the interests”.

New legislation has given Canberra the power of “last resort” to act retrospectively to force companies to divest their assets when national security risks emerge.

But experts said any move against a private Chinese company would be controversial, as it could lead to retaliation against Australian companies from Beijing. It would also override the Australian Department of Defense’s previous opinion that the port deal posed no security threat.

“Australia’s defense and security agencies were unanimous in 2015 that the deal did not pose a risk to national security,” said James Laurenceson of the University of Technology Sydney.

He said the assessment had not changed in 2018, according to comments from Julie Bishop, then Australia’s foreign minister. And despite public unrest from Chinese hawks in recent months, the government had received no advice on potential security risks, Laurenceson added.

Last week, Dutton warned that the dispute with China over Taiwan “should not be dismissed,” prompting Beijing to warn Canberra to stop interfering in its internal affairs.

Scott Morrison, Australian Prime Minister, said if he received advice suggesting there were risks, the government would take action.

When Landbridge bought the lease, Ye Cheng, the company’s founder, suggested the port would be part of Beijing’s BRI plan, a centerpiece of President Xi Jinping’s foreign policy.

Mike Hughes, vice president of Landbridge Australia, told the Financial Times the company was aware of the review and was willing to participate.

The deal was initially passed without much scrutiny in Canberra, which had recently signed a free trade agreement with Beijing. But U.S.-Chinese tensions over China’s aggressive expansion in the disputed South China Sea prompted Barack Obama to worry directly about then-prime minister Malcolm Turnbull about not being consulted on the issue. ‘agreement.

Canberra has since banned Huawei from its 5G network, tightened foreign investment rules and blocked the sale of several assets to Chinese bidders. Beijing accused Canberra of unfairly targeting its interests and imposed trade sanctions on a range of Australian products.

Peter Jennings, director of the Australian Strategic Policy Institute, which campaigned against Landbridge’s permission to keep the lease, said there had been a change in strategic circumstances since 2015.

“China is currently pursuing a policy of coercion to try to get states to behave in a way that suits Beijing. The obvious question to ask is, how comfortable can we be with the fact that key pieces of Australia’s critical infrastructure are owned by Chinese companies? “

Jennings said the government should review Chinese or Hong Kong ownership of other important assets, including power grids and port infrastructure in New South Wales and gas pipelines in Western Australia.