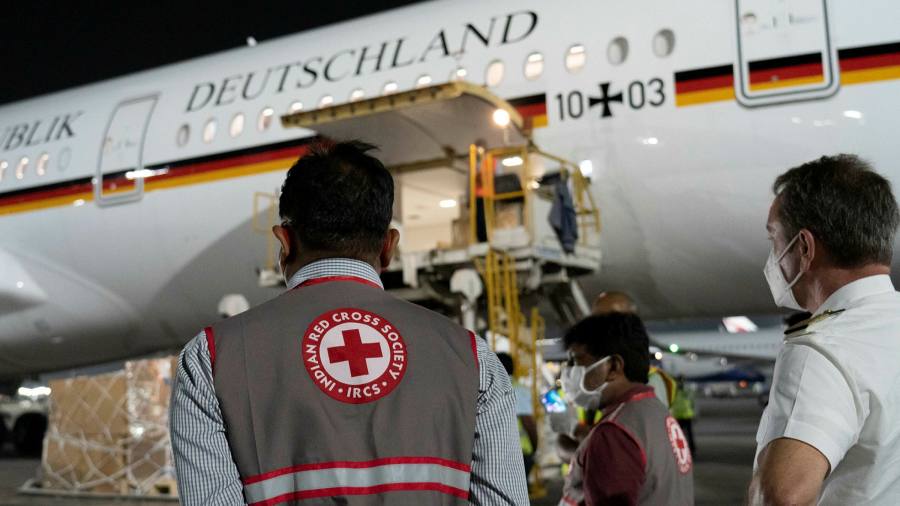 Emergency medical aid is pouring into pandemic-stricken India from around the world as the government seeks to push back against criticism of the slow pace in sending supplies to hospitals and states that desperately need them.

The huge influx of oxygen generators, oxygen concentrators and cylinders, life-saving medicine vials and other medical equipment marks the first time India has accepted large-scale international humanitarian assistance since the Tsunami of Boxing Day 2004, reflecting the scale of the crisis.

The official number of coronavirus cases in India surpassed 20 million on Monday, as more than 350,000 new infections were detected. Although daily cases fell from a high of over 400,000 on Friday, testing has also dropped significantly. The Indian medical system, including its oxygen supply lines, remains under pressure from the large number of patients with Covid-19. Even officials involved in distribution efforts have been hit hard by the virus.

Over the past week, dedicated relief flights from countries including the UK, US, EU member states, Taiwan and Uzbekistan, have delivered tons of supplies and equipment. others are expected in the coming days from Israel and elsewhere.

But Prime Minister Narendra Modi’s government has faced fierce criticism from opposition politicians over the slow delivery of aid, as well as the lack of clarity on where the aid is going.

Many hard-hit states said they had received no assistance, and some said much-needed supplies were still in warehouses.

“We ask and demand from the government. . . Share it with all Indians: where does this help come from and where is it going? Said Pawan Khera, spokesperson for the opposition Indian National Congress. “You owe it to the public.”

In a statement on Tuesday, the central government said authorities were working “24 hours a day, 7 days a week to expedite and clear goods upon arrival.”

He listed 38 institutions across India that he said had already received material. “Every effort is made to unpack, repackage and ship these [goods] with the least possible execution time, ”he added.

Rudra Chaudhuri, director of the Carnegie India think tank, said relief efforts had been hampered by the high number of Covid-19 cases among Indian officials.

But he said the government should provide more clarity on where emergency supplies are going, which he did not say. “This is a very important issue for donors, recipients and public confidence,” he said.

In the recent past, India has refused to accept international aid, which it believes was inconsistent with its own image as an emerging global power.

Modi recently called on nongovernmental groups to step up and help respond to the crisis, but global aid organizations say new restrictions on NGO activities last year have hampered their ability to operate.

An overhaul of laws governing foreign charities is making it more difficult for organizations like Oxfam and Médecins Sans Frontières, as well as their local partners in rural areas, to receive and use foreign donations.

“Over the past year so many regulations have been introduced on NGOs, it has really crippled humanitarian relief work,” said Amitabh Behar, managing director of Oxfam India, the local branch of the global organization. rescue.