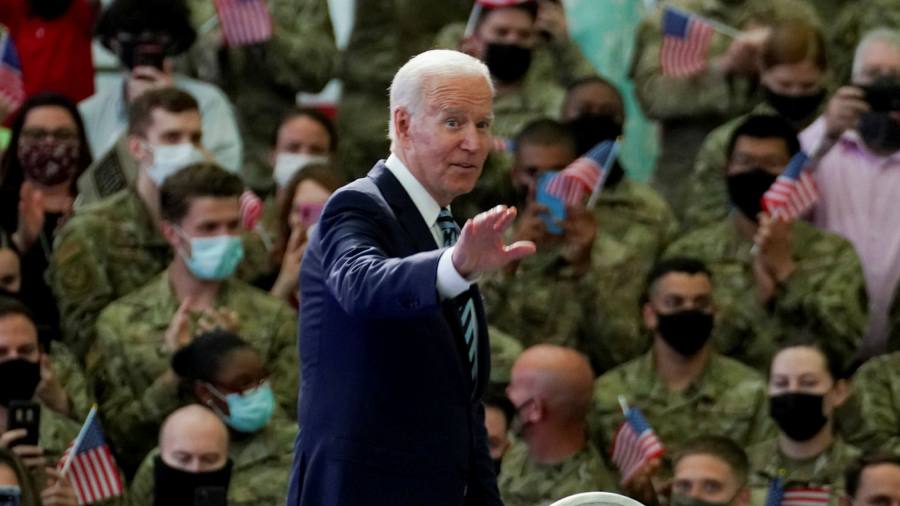 Boris Johnson will face pressure from Joe Biden on Thursday to work with the EU to end a deadlock over a settlement in Northern Ireland, as post-Brexit talks stalled and threats .

The US leader, who is meeting his British counterpart in Cornwall ahead of a G7 summit, would not agree to any measures that endanger or undermine the Good Friday deal or peace in the region, said Jake Sullivan, his security adviser national.

Johnson will also face pressure from EU leaders at the summit, as the EU reiterated its threat to retaliate with trade sanctions if Britain unilaterally suspends parts of the so-called Northern Ireland Protocol, which aims to avoid a hard border on the island of Ireland.

Maros Sefcovic, vice-president of the European Commission, said he was convinced that “European leaders will raise this issue” at the G7, which begins on Friday. Emmanuel Macron, the French president, is among those who want the EU to take a hard line with Johnson.

[Joe Biden] does not issue threats or ultimatums. He will simply convey his deep conviction that we must support and protect this protocol.

In anticipation of the diplomatic danger, Johnson takes Lord David Frost, his Brexit minister, to the G7 summit in Carbis Bay. Dominic Raab, Minister for Foreign Affairs, is the only other British Minister present.

Speaking on Air Force One as Biden flew to the UK, Sullivan said the President had been very clear on his steadfast belief in the Good Friday deal as the foundation for peaceful coexistence in Northern Ireland . “This agreement must be protected, and any measures that endanger or undermine it will not be welcomed by the United States,” he said. The 1998 accord ended decades of violent conflict in the region.

“President Biden is going to be making policy statements on this front,” Sullivan said. “He does not issue threats or ultimatums. He will simply convey his deep conviction that we must support and protect this protocol. “

Johnson says the EU’s control requirements for goods moving between Britain and Northern Ireland are too onerous and disrupt trade.

Speaking in Cornwall ahead of the summit, Johnson said he sought a compromise protecting the Northern Ireland peace process and insisted he was ‘not worried’ about the issue overshadowing the G7 .

The EU and the UK have confirmed after talks in London that divisions persist over how to resolve many issues related to trade deals for Northern Ireland, ranging from veterinary checks to pet travel.

Speaking after the talks, Sefcovic said the EU’s patience was “very, very slim” with the UK over its perceived failure to implement core parts of the protocol.

Sefcovic said the EU could take “cross-retaliatory measures” against Britain, such as introducing tariffs on certain products or suspending cooperation in certain sectors, if the UK does not. did not meet his obligations.

“If the UK were to take further unilateral steps in the next few weeks, the EU will not hesitate to react swiftly, firmly and decisively to ensure that the UK respects obligations under international law,” Sefcovic said .

After the meeting, Frost reiterated UK complaints that “the EU insists that we apply the protocol in an extremely purist manner.”

The lack of breakthroughs means pressure will mount on both sides ahead of the looming expiration at the end of this month of temporary exemptions that allowed British sausages and other chilled meats to enter Northern Ireland.

Following the meetings, which also covered other bilateral issues such as fisheries and citizens’ rights, the UK released its own analysis of the state of the talks, saying there had been “some progress towards solutions “in certain” limited areas “, including free movement. guide dogs and the VAT system for used cars.